Municipality of Ampelokipi - Menemeni: The redevelopment "tools" of environmental upgrading

With the participation of officials and special scientists, the workshop on "Urban regeneration and revitalization of environmentally degraded areas" was held, within the framework of the Act "Ecological consciousness strengthening” and promotion of environmental volunteerism in the Municipality of Ampelokipi-Menemeni" of the Region of Central Macedonia’s OP 2014-2020.

During the workshop, issues, related to the Municipality were discussed, in two key sessions:

b) presentation of suggestions and interventions that have been initiated for environmentally degraded areas of the Municipality of Ampelokipi-Menemeni and the urban planning, financial and other available institutional tools needed for their realization.

Welcoming the event, the Mayor of Ampelokipi – Menemeni, Mr. Lazaros Kyrizoglou, stressed: "In cities like Thessaloniki no one can be happy alone. And when I talk about Thessaloniki, I mean all the municipalities that make it up. There are no borders between municipalities. No one is asking for a passport from the citizen who will make use of the former camp Alexander the Great or Pavlos Melas when the development proceeds. The same applies for areas in municipalities of Eastern Thessaloniki but the center of the city as well. We are all together in this. No one can move forward alone. Therefore, it is important that actions for the environments upgrade are initiated in western Thessaloniki with interventions in the urban fabric as well. Additionally with the Municipalities initiatives, the project for the decontamination of the western coastal front, within the boundaries of our Municipality, has already begun.

The Deputy Regional Governor for Development and Environment, Mr. Kostas Gioutikas, spoke about this project, which is evolving as a program of the Region of Central Macedonia: "We estimate that more than 1,350 tons of non-hazardous waste and more than 950 tons of hazardous waste will be removed. We proceed to the cleaning of the groundwater up to the lagoon of Kalochori. The next stage is to correct the area of the old tanneries with the western coastal front and make it an integral part of all Thessaloniki’s everyday life." He also referred to the interventions made in the previous months, like the cleaning of the coastline of the Thermaikos Gulf from Chalastra, the mouth of Loudias and Delta of Axios, all the way to Pieria.

In his message, the Deputy Regional Governor of Infrastructure and Networks of the CCM, Mr. Paris Billias, referred to the importance of this mega project for the coastal front of Thessaloniki, for the upgrading and development prospects of the city as a whole, as well as the quality of life for the citizens, with a unified approach.

The importance of major urban regenerations, as "an element of common interest of all municipalities, which bridges distances and helps citizens’ communication", stressed the Deputy Mayor of the Municipality of Kalamaria, Mrs. Natalia Pantelidou, pointing out the example of the goal for the development of the former Kodra camp.

Mr. George Tsakoumis, in a dual status, as President of the Technical Chamber of Greece, but also, as head of the technical consulting company Consortis, which supports the actions of the Municipality of Ampelokipi-Menemeni for the environmental awareness of the public, stressed the "importance of promoting urban regeneration for the upgrading of the urban environment and balanced development".

During the workshop Mrs. Aikaterini Fotea deputy Director of the Local Health Service – Town Planning – Cleanliness & Environment of the Municipality of Ampelokipi – Menemeni, referred to the subject of the first section on the current situation in parts of the Municipality of Ampelokipi – Menemeni and especially within the urban web, citing the initiatives of the Municipality to increase greenery in central axes, as well as  in parks in the area (Bosporus, October 28th, etc.), increase accessibility for people with disabilities, projects of bioclimatic regeneration and energy upgrades in schools, initiatives to enhance electromobility, as well as interventions in the field of "smart city" formation, support of Roma populations by relocating them from degraded areas, etc.

Mrs. Clio Axarli, Peer Professor at the Department of Architecture of the Aristotle University of Thessaloniki, "While looking for the conditions for well-being in the city", noted that "architecture can meet the requirements for comfort in the outdoor area - thermal and optical - while reducing energy consumption and contributing to the creation of a better environment with various methods such as the proper use of the local potential of the affected solar radiation (appropriate sun protection, or sunstressing), wind protection or exploitation of local winds, proper selection of materials (and colors) in the urban environment, appropriate planting and use of vegetation, placement of water elements for the cooling of the space, through evaporative cooling, etc."

Dr. Paraskevi Kourti, Architect Engineer, speaking on "the policies of the integrated urban regeneration while focusing on the green European agreement", stressed the old and new challenges of urban regeneration in Greece: "Strengthening the interventions character of the reconstructions, without the deficit common space (streets – squares) and by avoiding a character of "landscaping", strengthening a scale of interventions that can bring about a radically different everyday life in cities and solve  significant problems, strengthening of strategic planning with feasibility assessment of financial viability and risk analysis, complementarity and synergy of actions. Also, strengthening broader cooperative schemes of inter-municipal or between the public and private sectors, creation of a stable system for the management of funding, as well as the institutional framework of ripening, cultivation of the cognitive consolidation of the methodology of integrated planning."

The General Secretary of the Municipality of Ampelokipi – Menemeni, Mr. Athanasios Papageorgiou, proceeded to a "Presentation of proposals and projects that have been launched for environmentally degraded areas of the Municipality of Ampelokipi - Menemeni" and stressed that the Municipality proceeded with a fast pace to the study of plans required by the promoted policies, based on national and European plans: "For example, we are one of the first municipalities to draw up SUMP,  and have proceeded with the design and submission of proposals for green spots, green roofs, interventions in schools and  we have launched a project to upgrade the electric lighting, amounting to 2.5 million euros with the tender documents being prepared. Given the difficulty that the Local Government faces in the financial sector in the context of the pandemic, we have a budget of 42 million euros with 18 million co-financed projects, and we are moving forward using all the financial tools."

Mr. Dimitris Doumas, Architect Engineer – Urban Planner, spoke on the "interventions for the planning of urban and extra-urban space using the new institutional tools – Area of coastal front, oil zone and camp M. Alexandros". Among other things, he referred to the Special Urban Plan of the Coastal Front of the urban complex, where for the area of the Municipality of Ampelokipi-Menemeni, the following are proposed:

He noted that in the context of the Special Plan for the coastal zone of Menemeni, the creation of a free communal space and the inclusion of land in the city plan for the development of logistics are proposed, while referring to the Special Urban Plan for the camp "Alexander the Great", he pointed out the proposal for the creation of an urban green pole with urban services and cultural functions on the route of the Western Arc,  the positioning of a new Church and a Botanical Garden.

Mrs. Chara Kyriakides, Architect Engineer – Urban Planner, MSc in her presentation on "the actions for the restoration and upgrading of the western coastal front of Thessaloniki" (TERRAMED project), referred to four areas that make up the current situation and prospects of the region, referring to "strengths (comparative strengths), weaknesses, opportunities, and threats", as follows:

Finally, Dr. Christos Vatseris, Research and Restoration Specialist for soil and groundwater referred to the "remediation – Restoration of subsoil and groundwater in the wider area of the Municipalities of Thessaloniki, Ampelokipi – Menemeni and Delta". Talking about the various parts of the area of implementation of the remediation project, he pointed out that a variety of pollutants were identified, from a large volume of broken asbestos cement waste, to floating mineral oils in groundwater and presented the decontamination techniques applied for in situ decontamination of the areas of application of the studies. 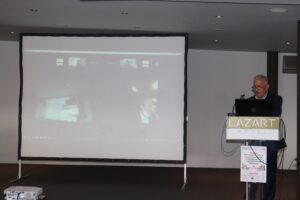 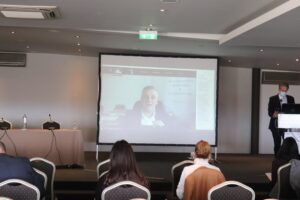 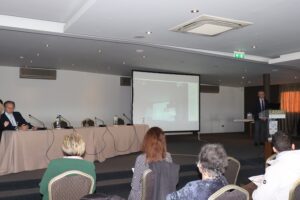 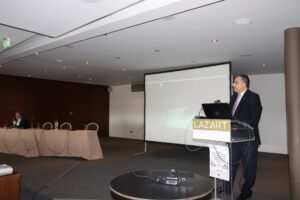 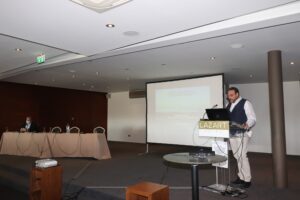 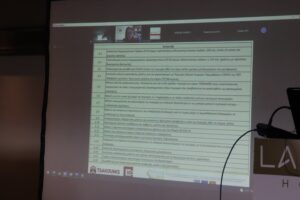 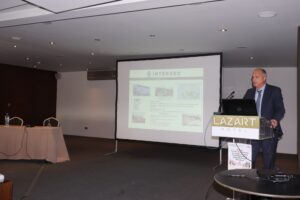